Does it feel like you’re always forgetting where you put your keys, wallet or cell phone? Do you return home from the grocery store without all your ingredients? Ramp up that memory by making green tea a regular part of your day.

Full of antioxidants, this tea powerhouse may not only improve overall cognitive function but also keep dementia at bay. Recently, researchers in Japan studied how regular consumption of green tea impacts retention.

For three months, 15 elderly patients added green tea powder to every meal while cutting out all other supplements. What did they discover? Green tea is a brain booster! Not only did the patients’ short term memory increase but the progress of deterioration slowed down. In order to reap the benefits of this study, drink 2 to 4 cups a day. Your mind will thank you for it.

Does your dog or cat try to sneak a sip of your morning tea? Ever wonder if you should offer your pet its own cup? According to Dog Behaviorist and Canine Holistic Wellness Advisor, Karen Rosenfeld, you not only can but should give your pets their own cup of tea.

“Tisanes can be antibacterial, antifungal, antispasmodic, analgesic, anti-inflammatory, antimicrobial and even an antidepressant,” said Rosenfeld. “It is just amazing what tea offers for our pets.” 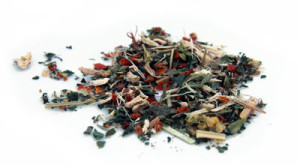 To optimize the health benefits of a tisane, choose organic when available or use fresh herbs from your garden. In addition, pay careful attention to the size of your pet, adjusting the dose accordingly. Rosenfeld recommends 1/16 teaspoon of dried herbs for dogs and cats that are up to 10 pounds and no more than 2 teaspoons for dogs over 100 pounds. As far as teas to avoid, black and caffeinated green tea should never be given to pets. Caffeine can be extremely toxic for your four-legged friend.

Rosenfeld recommends tea to most of her holistic clients and offers a cup of tea to her pooches on a daily basis, brewing either decaffeinated green tea or rooibos. The tea is cooled then poured directly on top of their food. The benefits of rooibos tea for pets are similar to those in humans, offering a boost to their immune systems. Rooibos also works wonders, shares Rosenfeld, for those pets that are suffering from skin allergies and anxiety. 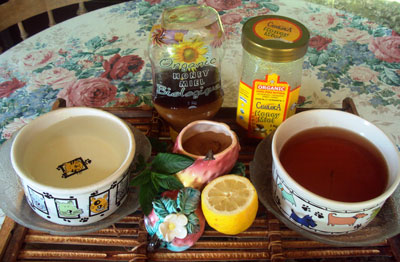 Decaffeinated green tea and its extract may assist with a variety of ailments in pets, from treating cancer to assisting with bad breath. “Green tea is fantastic for dogs, providing that you are using decaffeinated and to adjunct the antioxidant properties of the green tea, you should use fresh lemon juice,” said Rosenfeld. She recommends using green tea for everything from topically treating an eye infection (3 to 5 drops in the eye) to cleaning your pet with a green tea body wash. However, the ASPCA recommends using green tea with caution, advising that even with decaffeinated blends; some pets may experience stomach pain.

Wary about giving your pet green tea? Have no fear, other herbs can be just as beneficial. Chamomile (either the tea or flower) is wonderful for reducing anxiety and also to topically treat eye infections. Meanwhile warming ginger root, either as tea or placed directly in food, can help relieve nausea and improve vascular circulation. This is particularly beneficial to dogs with short fur that may be sensitive to cooler nights. In fact, she regularly gives ginger root to her boxer Robbie, adding the root to his daily salad.

“Tisanes are a valuable nutraceutical for dogs,” said Rosenfeld. “If you choose not to give them, you will lose access to some amazing health benefits.” Whether you choose to make your own or buy a blend created for pets, take the time to share a cup with your pet today.

Cautionary Note: When using herbs as part of a treatment plan, it is important to check for any potential interactions with medications. In addition, always double check with your veterinarian to make sure that both the herbs and dosage are safe for your pet to consume.

The most commonly consumed health drink!

Green tea is the most commonly consumed health drink in the world. However, to reap green tea's full benefits, you must drink enough each day. Also, it is important to choose a naturally grown green tea.

Green tea contains high concentrations of antioxidants known as polyphenols, according to the University of Maryland Medical Center. It seems the world has the right idea, because green tea offers many health benefits, including helping to keep your heart healthy.

Green tea has been shown to fight atherosclerosis, a condition that causes cholesterol to build up in your arteries. This narrows your arteries, restricting blood flow. Eventually, atherosclerosis can lead to coronary artery disease. Some research studies have shown green tea drinkers experience a reduced heart disease risk. Green tea may also raise levels of high-density lipoprotein, or HDL, the good cholesterol that helps to reduce your harmful LDL cholesterol levels.

The catechins in green tea are not only helpful in fighting cancer, but they help the body burn fat as well. In a Japanese study at the Department of Animal Science at Shizuoka University, researchers fed green tea powder to mice for sixteen weeks and observed the changes in their bodies and habits. The researchers noted that the mice fed the powder ate less, gained less weight, and accumulated less fat in their bodies than mice in the control group. This led researchers to conclude that green tea may be effective in reducing body weight.

Green tea may be helpful in preventing blood sugar spikes, which is advantageous for everyone, but for diabetics in particular. According to the Pacific College of Oriental Medicine, "Diabetes, which is even more common than high blood pressure, can actually be kept under control by consuming green tea. Starch in any form is converted into sugar, and this is done with the help of an enzyme called amylase. The polyphenols present in green tea extract reduce the amount of amylase produced; thus, the levels of sugar in the blood also decrease."

MedlinePlus ranks green tea as "possibly effective" for preventing some cancer types, including bladder, esophageal, ovarian and pancreatic cancers. A study published in the February 2013 issue of "Cancer Epidemiology” found Chinese women who drank green, black and oolong tea experienced a reduced ovarian cancer risk. Furthermore, researchers found the more tea a woman drank, the lower her risk for ovarian cancer. While laboratory studies have shown reduced risk for cancer, studies in people have not yielded definitive results, according to the National Center for Complementary and Alternative Medicine.

Caffeine in your green tea may not be all bad -- drinking green tea has been shown to improve mental alertness and thinking, according to the University of Maryland Medical Center. Additionally, green tea's warmth can soothe your throat. So, drink up -- green tea is good for you.

While the amount of polyphenols in green tea can vary among brands, the University of Maryland Medical Center recommends drinking 2 to 3 cups each day. This will provide about 240 to 320 milligrams of polyphenols.

Green tea is the least oxidized of all the tea categories. It can also be the trickiest to brew correctly. The most important factors to keep in mind are temperature and time. Green tea requires lower temperature water because too much heat can trigger the release of tannins, causing your brew to become bitter and unpalatable. Also, letting the leaves stay in the water for too long has a similar effect. Whether you choose a traditional eastern style or western method, knowing the basics will help you to find your way. 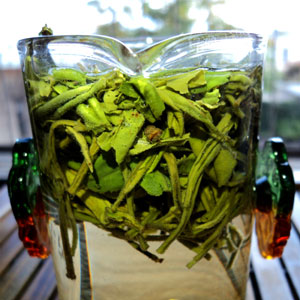 Traditional methods used in China and Japan generally call for a larger amount of leaf, a smaller amount of water and short steep times. Vessels can be small glass pitchers or clay side-handled teapots but the basic principles are the same. The volume of leaf used can vary but a good rule of thumb is to cover at least the bottom of whatever vessel you are brewing in. The steaming process gives Japanese teas a more deeply vegetal taste so you’ll want to stick with temperatures between 140 and 175°F. Steep times are rarely longer than two minutes for these teas.

Chinese green teas aren’t quite as delicate so the recommended water temperatures will range from 170 to about 200°F. Steep times will stay around two to three minutes. Another option that is very popular in China is to drink your tea “grandpa” style. All you’ll need to do is use a bit less leaf and slightly lower temperature water. Fill a glass with water and use your teeth as a strainer. Just refill it as you go to avoid bitterness.

The general rule for western style brewing is one teaspoon of leaves per cup of water. Your leaves should never be steeped longer than three or four minutes. It’s best to use teapots or cups that are made out of thinner mediums such as porcelain or fine ceramics. Thicker materials like cast iron will retain too much heat. You may also want to leave the lid off while steeping to avoid steaming the leaves. If making a single cup, open basket style steepers work best as these will allow your leaves to expand without restriction.

Most importantly, there is no right or wrong way to make tea. What really matters most is that you enjoy the taste of what is in your cup.